Freshcap Ultimate Mushroom Complex (formerly Thrive 6) is a blend of 6 equally-weighted types of mushrooms, which have clinical evidence of boosting immunity, cognition, and energy. Here we’ll examine its properties and effects.

What is Ultimate Mushroom Complex Powder?

Chaga (Inonotus obliquus) is one of the most potent antioxidants in the world, and is rich in a variety of vitamins, minerals, and nutrients​1​. It has been used historically to support immune function and liver health​2,3​. It also appears to lower blood sugar​4,5​. Recent research on Chaga has been focused around its potential anti-cancer properties​6–9​. Chaga also has anti-inflammatory, antitumor, anti-mutagenic, antiviral, antiplatelet and analgesic properties​10,11​.

Red Reishi (Ganoderma lucidum) is referred to as “the mushroom of immortality.” It is praised for its support of the immune system and its ability to improve sleep and reduce stress by promoting calmness via GABAergic effects​12–14​. It is a potent immunomodulator​15,16​. Red Reishi is also renoprotective, anti-inflammatory, and hepatoprotective, and it may improve enlarged prostate symptoms in men and lower cholesterol​17​. As with Chaga, much of the recent research on Reishi has been devoted to investigating its anti-cancer properties​18–22​.

Lion’s Mane (Hericium erinaceus) is famous for its cognition-boosting and antidepressant properties, and is thus popular in nootropic supplement blends. It is neuroprotective, and is studied primarily for its potential efficacy for combating neurodegenerative diseases like Alzheimer’s and Parkinson’s​23–31​.

I discussed Cordyceps and its ergogenic effects in a post about PeakO2®. Cordyceps militaris appears to contain comparatively more bioactive compounds than its brother Cordyceps sinensis. As such, most supplements you see nowadays will contain the militaris species. In a nutshell, Cordyceps improves oxygen capacity and oxygen utilization, thereby improving cardiovascular function, increasing exercise capacity, boosting energy, and reducing fatigue​32,33​. It also appears to upregulate the dopaminergic system via enhancing tyrosine hydroxylase expression​34​. Cordyceps also appears to have antitumor, radioprotective, antiplatelet, renoprotective, and antidiabetic effects​35​.

The Maitake (Grifola frondosa) mushroom is commonly known as “Hen of the Woods.” Like the Turkey Tail mushroom, its primary use seems to be as an immunomodulator, activating white blood cells. Also like Turkey Tail and others, it is studied primarily for its anti-cancer benefits​41,42​. Maitake is also antidiabetic and is used to induce ovulation in women with PCOS​43​.

A fully developed mushroom at the end of its lifecycle is known as a “whole fruiting body.” It’s what we picture when we think of a mushroom. What most people fail to realize is that many “mushroom” supplements out there may contain little to no actual mushrooms at all. They are instead selling you what’s known as myceliated grain, near the beginning stage of a mushroom’s lifecycle.

Think of mycelium as a seed from which a mushroom later grows. Mushroom growers actually use mycelium as seeds which are put on some form of carrier material (usually grains like wheat or rice). It’s a linguistic sleight of hand on many supplement labels that is actually against FDA regulations. “Mushrooms” from some companies could still just mean myceliated grain. Compounding this problem is the fact that the research out there on mycelium is using pure mycelium, not myceliated grain.

To briefly walk you through the process, grains can be put in autoclavable bags for sterilization, after which they’re inoculated with mycelia culture. The bags are then incubated, during which stage the mycelium will colonize the grain, at which point it’s referred to as “grain spawn” or “mycelium on grain” (MOG).

This “mycelium on grain” would usually then go to a mushroom grower to continue its lifecycle into a whole fruiting body (the real mushroom). Unfortunately, many suppliers stop at this stage and simply sell you the milled grain, with a little bit of mycelium, as a nutritional supplement. The benefit for these companies is of course that the aforementioned process is very scalable and allows for mycelium to be grown and colonized quickly and cheaply in a lab from anywhere in the world.

Cheap and efficient sounds great, though, right? Wrong. The problem for the consumer is that these milled mycelium-on-grain powders contain little, if any, of the bioactive compounds (beta-glucans, triterpenoids, ergosterol, etc.) that are responsible for the benefits above. You are buying mostly grain. As you might imagine, myceliated grain products have a very different taste and smell than real mushrooms (whole fruiting bodies). The former is usually a muted beige color with a taste not unlike breakfast cereal (this makes sense, as it’s mostly grain). The latter, depending on the specific mushroom(s) used, will almost always be a vibrant brown powder with a rich aroma and taste.

Nammex (North American Medicinal Mushroom Extracts), the gold standard of organic mushroom suppliers and pioneers in mushroom growing, research, and supplementation, prides itself on only using 100% whole fruiting bodies. The mushrooms in Ultimate Mushroom Complex come from Nammex, so you can rest assured that you’re getting 100% organic whole fruiting bodies (real mushrooms), with analytically-tested and guaranteed bioactive compound content.

Jeff Chilton, President of Nammex, explains these processes and concepts in the video below​[NO_PRINTED_FORM]​.

Know what you’re buying. Look for mentions of “whole fruiting bodies” and “beta-glucan content.” Freshcap Ultimate Mushroom Complex is guaranteed to have at least 28% beta-glucans.

According to RealMushrooms.com, here are some common terms that can help you spot myceliated grain products:

About Freshcap and the Creators of Ultimate Mushroom Complex

Tony Shields, co-founder of Freshcap Mushrooms, is obsessed with and passionate about mushrooms. He started a mushroom farm himself, and his primary goal has been to “demystify” medicinal mushrooms and bring their benefits to the masses. He suggests that “we can live better and feel amazing with the help of mushrooms!”

I actually enjoy the flavor. Most mushroom powders oddly look, smell, and taste like raw cacao/cocoa powder. Think of an earthy dark chocolate. It goes great with coffee. I would argue you could even potentially use this mushroom powder as a caffeine replacement. I don’t have a definitive before and after, but my blood biomarkers have also looked great on recent bloodwork.

You could also mix this with tea, smoothies, yogurt, oatmeal, soup, etc. Sometimes I’ll do an afternoon smoothie of:

Mushroom supplementation – particularly Lion’s Mane and Cordyceps – is arguably even more important for older users, due to their aforementioned antineurodegenerative and anti-inflammatory properties.

Recommended dosage for Ultimate Mushroom Complex is 1g/day, which is 1/2 tsp. of the powder. I like to do 1g twice per day.

Prefer capsules instead? You can find them from Freshcap here. 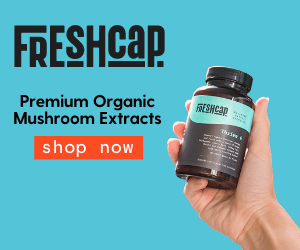